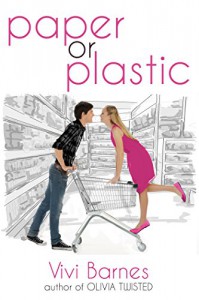 Paper or Plastic was a sweet story about a girl who was caught shoplifting a lipstick. This minor theft led to an entire world-view change for main character Lex, as she was forced to work at the discount retailer for the summer as penance for her crime.

Prior to her time at SmartMart, Lex was a popular, if not self-centered cheerleader in her high school, with little to no regard for anyone outside her social circle. I enjoyed seeing Lex change from this self-absorbed teenager to something more... someone who cared for the people around her.

Romantic interest Noah was a manager-in-training at SmartMart and persona non grata for the last two years of high school. Lex was torn between her budding attraction for Noah and her best friend Bryce who despised Noah. You see, the whole school thought Noah ratted Bryce out to school officials for vandalism, which turned Noah into a pariah. I loved Noah. He was a great character. Frankly I thought Lex was lucky to nab a guy like him.

The story was a fast-paced read with lots of dialogue. I loved the romance between Lex and Noah-- it was so adorable. One character who really stood out was Ruthie-- her scenes were some of my favorite. The ending was upbeat, with Lex sticking to her new world-view and not reverting to her old routines. A fun, light story perfect for the pool or the beach.