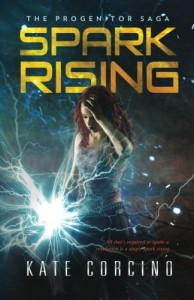 Spark Rising is a gritty urban sci-fi that is set in a post-cataclysmic society where electricity is created by Sparks who can manipulate Dust. Part sci-fi, part dystopian, with some rather steamy romance, this novel has a complex plot and lots of imagination.

I really liked Lena. Her back story was rather traumatic, which made me wonder how she was so well grounded in life. Lena knew what she wanted-- freedom from the Council-- and she worked hard to achieve it. When it came crashing down around her, she fought tooth and nail, displaying admirable courage and loyalty.

The romance between Alex and Lena was hot on so many levels. Alex, on the other hand, ran hot and cold for me. Many times I liked him but sometimes he was so arrogant, I wanted to hit him over the head with the nearest object. Ms. Corcino did an excellent job at world-building. Even something as confusing as the Dust, she managed to explain in a way that I understood. Mostly. While I really appreciated the vivid descriptions and long narrative scenes, sometimes I found myself skimming to get to the next action scene and some dialogue.

Did I mention that there's lots of action? Spark Rising is full off action, suspense. and plot turns that are enough to make a reader's head spin. This novel is no light read-- it will leave you thinking about the characters after you've finished. An intriguing first book in a sci-fi series that promises to be worth reading.