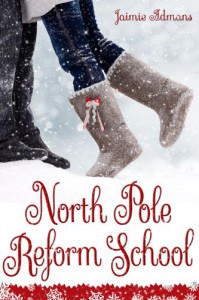 Jaimie Admans has created a wonderful holiday story that made me laugh out loud and left me feeling so happy at the end. Frankly, North Pole Reform School was just what I needed today to laugh the stress away. It's such a creative premise, and the North Pole world created by Ms. Admans is both familiar and strange. We all picture Santa's village with the festive Christmas lights, happy elves, and nonstop Christmas music. But I have never considered that the poor elves had to deal with the potential threat of zombies. Who knew?

Five individuals are spirited away by elf magic in the middle of the night, sentenced to reform school for deliberately ruining Christmas for others. Main character Mistletoe Bell has hated Christmas for a long time. Not only does she have what she considers a miserable name, but she was born on Christmas Eve, making her birthday a far second to Christmas with her family. Luke Wyatt suffers during Christmas as well, and he takes out his frustrations on the neighborhood decorations (I get it, Luke. I really do.). Little do Mistletoe and Luke know that what they consider the worst thing to happen to them may just turn into the best. The budding romance between the two is so sweet. They make a great couple.

The three other characters at the reform school all have pretty good reasons why they hate Christmas, with the exception of Joe, who needs an overall adjustment on his outlook on life. My favorite part of this novel was the comedy. I swear it will be a while before I look at ducks the same way. What do ducks have to do with the North Pole? Sorry, not telling - you'll have to read the book! The way elves Navidad and Tinsel screwed up idioms was hilarious (there's one at the end of the excerpt). I enjoyed following Luke and Mistletoe around as they experienced the entire North Pole operation. This book is very hard to put down once started. There's really never a dull moment in the story. The ending was great, perhaps a tad sappy, yet adorable nonetheless. Never underestimate the power of a funny book with a satisfying ending.

I highly recommend North Pole Reform School to everyone high school and up that enjoys an interesting plot with great characters and a healthy dose of hilarity. There was quite a bit of coarse language, so keep that in mind. This is a great book year-round, but especially satisfying this time of year. It's one of my favorite reads this year.